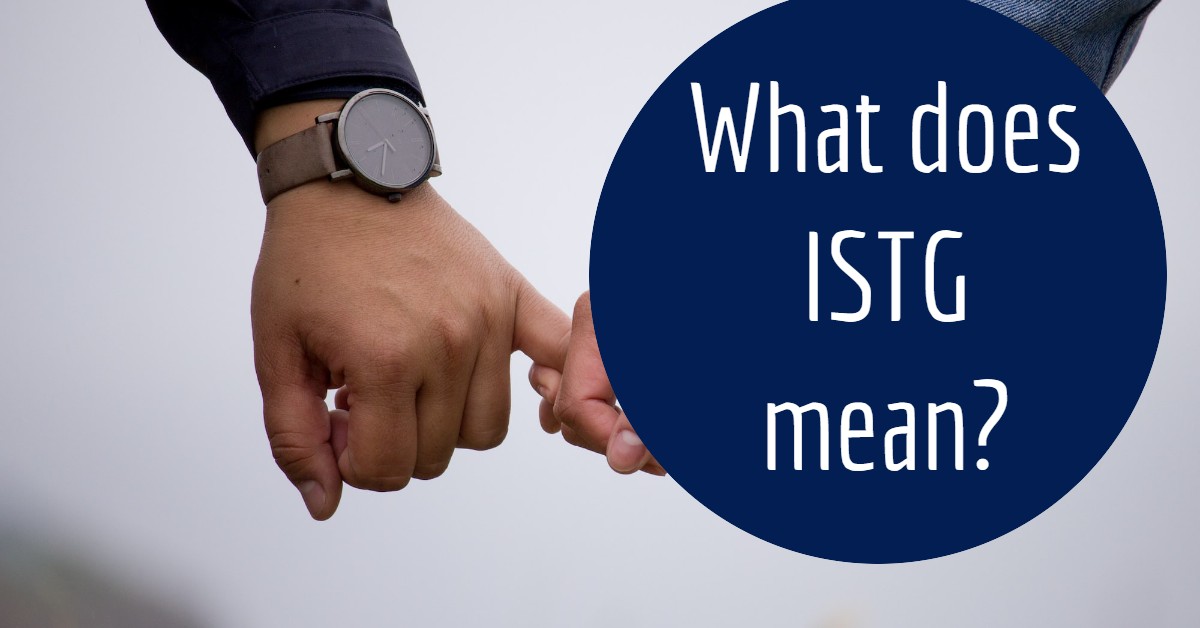 You may have seen the acronym ISTG on text messaging, social media, and all over the internet. One may wonder what does ISTG mean?

This post is specifically written to answer the question and explain the concept and use of the acronym ISTG in detail.

ISTG is an acronym that means ⇒ ‘I swear to God.’ This is according to Wiktionary.

ISTG is typically used outside of a serious religious context to convey extreme seriousness, exasperation, or surprise.

This slang abbreviation aids in conveying your message to others. ISTG is closely related to the wildly popular OMG (Oh My God) acronym, which has dominated the social web for years.

ISTG stands for “I swear to God.” It’s an abbreviation that people use in online conversations and posts to reassure others, express annoyance, or express how strongly they feel about something. It can be found everywhere on the internet, from social media platforms like Twitter and Instagram to private messages between friends.

ISTG is used to express emotional sincerity in a variety of ways. ISTG is commonly used in the following ways:

You can write this acronym in the lowercase “istg” and the uppercase “ISTG.” These two can be used interchangeably. However, depending on the context, the all-caps version may appear more “intense.”

Examples of the use of ISTG in a sentence

Let’s examine a few examples of the use of ISTG:

ISTG is one of the hottest internet acronyms among today’s internet users.

As we have seen, this versatile slang term means ‘I swear to God.’ So, how can you use ISTG in your messages and social media posts?

ISTG, which stands for “I swear to God,” can be used to express that you’re being serious and truthful or that you’re experiencing strong emotions—typically excitement or frustration.

What is ISTG FR FR mean?

‘ISTG FR FR’ stands for I Swear to God For Real, For Real.

Simply put, “Frfr” stands for “for real, for real.” It is a way of demonstrating to the listener that you are on their level. It is more commonly used in writing than in speaking.

Origin/History of ISTG – What does ISTG mean?

Unlike other internet acronyms that began in the 1990s, ISTG most likely began in the early 2000s. As more young people gained access to the internet, instant messaging programs such as AOL Instant Messenger and Yahoo Messenger grew in popularity. This came with a completely new set of acronyms based on popular phrases used by youths at the time.

ISTG gained popularity in the late 2010s due to its use in messaging apps such as Snapchat and WhatsApp.

This acronym can now be found all over the internet.

Ways to use ISTG in your messages

There are several ways to use ISTG in your messages, with the meaning changing depending on the context.

For instance, the acronym can indicate that you are frustrated or annoyed by something. An “annoyed” ISTG is usually delivered with a sarcastic joke or a hint of someone’s annoyance, such as “ugh.” Someone might tweet, “Ugh, istg if this rain doesn’t stop soon,” to express their displeasure with the weather. The message may also appear particularly snarky, such as “ISTG…” with ellipses being a common sign of frustration.

It can also convey sincerity or vouch for the truth of something. You could use this if you’re attempting to describe something that appears impossible or if others express doubts about your story. You might say if you’re trying to persuade others of a supernatural encounter, “ISTG! I saw a ghost!”

There’s another way to use this slang term, which has grown in popularity in the social media age. It is referred to as an “emphatic” ISTG. People frequently use this on social media platforms such as Twitter and Instagram to express how strongly they feel about something.

This definition is typically overly positive, with people using it to express how much they enjoyed something. You could use this to express your thoughts on an album you recently listened to or a movie you recently saw. For example, if you liked a recent Netflix show, you could say, “ISTG, this new show is amazing.”

You can also use it to highlight opinions that, while not unpopular, may be divisive to some. These are also known as “hot takes” — ideas that spark a lot of discussion and debate. For instance, if you enjoy Hawaiian pizza, you could tweet, “ISTG pineapples belong on pizza.”

What Does “ISTG” Mean on Snapchat? 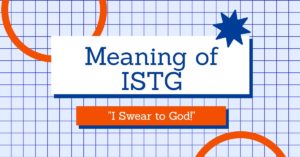 “ISTG” is an abbreviation for the phrase “I swear to God.”

There are a variety of ways to use “ISTG” over texts on Snapchat, and they are heavily dependent on the context.

The conversation illustrated below gives you an idea of the use of “ISTG” in expressing honesty/sincerity.

Jerry: Hey, Dan. I left my sandwich in the fridge and couldn’t find it when I returned from class.
Dan: Really? I haven’t been to the fridge since you left for lectures too. I don’t know where you dropped the sandwich.
Jerry: You didn’t eat it?
Dan: ISTG bro. I haven’t seen or eaten your sandwich.

You can use “ISTG” in a chat to make a promise. It’s like an extension of telling the truth but in a different context.

See an example in the conversation below.

Ben: Hi, Dan. Dad said I should check on you and how you’re doing in school. How are your grades?
Dan: My grades were down last semester, but I’m working even harder to get them back up.
Ben: Okay. Make us proud!
Dan: I will make you and Dad proud, ISTG.

“ISTG” can be used to express annoyance in chats. Check out the illustration below:

Majid: Hello! I’ve been trying to reach your phone since yesterday.
Kelly: Is there any problem?
Majid: Yes! My ceiling is falling apart, and I need you to get someone to fix it! I paid you for that!
Kelly: Please, remain calm. I’ll be with you in 4 hours.
Majid: 4 hours?! Ugh! ISTG! I’m going to lose my mind!

“ISTG” can also make your threats sound more intimidating or menacing over texts. Check the conversation below:

You can also use “ISTG” as a general interjection like you use “wtf,” “omg,” “idk,” and several others. This conversation will help:

ISTG is internet slang for “I swear to God,” and it’s a popular social media and texting abbreviation.

Other Possible Meanings of “ISTG”

There are other possible meanings of “ISTG,” depending on the crowd you’re using it with.

These other possible meanings of ISTG include:

When You Shouldn’t Use ISTG

The abbreviation ISTG is frequently used in emails, blogs, and social media posts. The term is not commonly used in a formal or official context. As a result, ISTG is not appropriate for professional or formal use in order to elaborate or add heartfeltness to your remarks.

It is best to avoid saying the word ISTG in front of devout and spiritual people, as this phrase may cause unpleasant discord. You should also avoid saying ISTG in a place of worship, as many consider it blasphemous.

You should be very careful. ISTG can be used to make fun of the Lord’s name. This you should avoid at all costs.

ISTG can be a safe way to emphasize your points when used correctly. Inappropriate use of ISTG can be considered disrespectful and blasphemous.

As a result, only use ISTG when absolutely necessary.

ISTMFG, which stands for I Swear To Mother F***ing God, is a more vulgar and disrespectful variation of ISTG. This one is far more uncommon, and because it is so vulgar, you should exercise extreme caution when using it in text or online conversations.

What does ISTG mean? You now know better. Use ISTG in the right context to emphasize your points, but avoid using it in a formal or professional setting. Know that ISTG is a social media slang.

If you have any questions or comments, do well to connect with us using the comment section below. And don’t forget to subscribe to our site, chidant.com, for more educative articles.