What does asl mean? Let’s explore the meaning of asl as an acronym and social media slang. 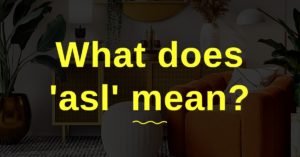 ASL is also an abbreviation for various words, concepts, associations and organisations. Find the comprehensive meaning of asl in this article.

Asl is an internet abbreviation for age, sex, and location. It is usually used online as a question in romantic or sexual contexts.

Let’s say you’re chatting with a random stranger on social media, and you say hi! Stranger response: asl?
You can now reply with your age, sex and location. For example, 21 F London.

Asl can mean one of three things in modern text talk.

It’s also used as internet slang for the intensifying expression “as hell.”

In many online communities, asking someone asl abruptly and anonymously is considered a rude, creepy, and immature introduction—not to mention dangerous, given the risks of sharing one’s location with a stranger. Some chat rooms’ rules explicitly discourage or prohibit the use of asl.

Someone sarcastically submitted that asl is what stupid people say on chats to learn who you are and where you live so they can come to your house with a chainsaw and kill you.

How is asl pronounced?

Asl is pronounced as ey-es-el.

Other forms of asl

Other words related to asl

Some words that are related to asl are:

The acronym asl has been used in messaging services, texts, chat rooms, and other online discussions between strangers. The person asking asl is requesting that the other person reveal their age, gender, and town, state, or country of residence in order to determine whether they want to make a romantic or sexual advance on the person.

Asl (or a/s/l) has been used in online dating since at least 1998. In 2015, the term had become widespread and well-known enough to serve as the title for Melissa Pimentel’s romance novel Age Sex Location.

Since at least the early 2010s, asl has been used as an internet abbreviation for “as hell,” with asl intended to sound like how this expression is pronounced. “Billy is funny asl”, for example, means “Billy is funny as hell.” This is equivalent to the intensifier “af”, which stands for “as f*ck”.

To distinguish it from the newer meaning, the earlier asl is sometimes written as a/s/l.

What does asl mean on TikTok?

Asl is not a new TikTok phrase; it is a standard internet phrase that stands for ‘age, sex, location.’ Some TikTok users, however, use the phrase as a shortened way to say “as hell.”

What does asl mean on Snapchat?

If you hear “asl?” and don’t know who they are, they’re asking for your age, sex, and location.

They mean geographical location rather than where you are in your home, school, or workplace. Don’t provide your address or precise location.

This ASL usage is typically capitalised, but some people prefer to keep it lowercase.

“Asl” means “as hell” if it’s a friend messaging you or it’s used in a sentence.

Asl is an abbreviation for “as hell,” and it can be used to emphasise something in the same way that “like crazy” or “seriously” can.

If you really can’t tell which version someone is using, replace “asl” with “as hell” in their sentence. If that makes sense, they’re using it as a contraction.

This version of “asl” is almost never capitalised.

What does asl mean on Omegle?

Omegle is a video chat service that connects you with strangers all over the globe. People often start conversations with “asl?” to get your basic info upfront. They may not want to speak to someone of another gender, or they may be trying to avoid talking to someone who doesn’t speak their language.

Hence, “Age, sex, location” is the most common usage of “asl” on Omegle.

What does asl mean on social media or over text?

The most common use of “asl” on social media or in text is “as hell.”
People rarely ask for your age, gender, and location on social media because they can get that information by clicking on your profile. If you see “asl” in a text message or on Instagram, it’s a contraction for “as hell.”

What does asl mean on Dating sites?

Someone sending you “asl” as a message is interested in knowing your age, gender and location to see if both of you can get started with something meaningful.

Asl is a great conversation started on dating sites.

Read: Dating on Meetville 2023 – Connect With Local Singles Near Me Now

What does ASL mean? – Other Meanings of ASL 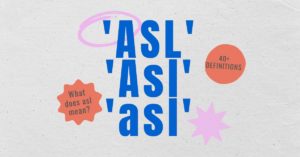 According to Wikipedia, ASL is a common initialism for American Sign Language, the sign language of the United States and Canada (not to be confused with Auslan, also called ASL), and may also refer to:

ASL is also an acronym for:

What does ASL mean in Science and technology?

In Aviation, ASL is an abbreviation for the following:

The field of biology and medicine, ASL stands for:

In Computing, ASL stands for:

Other uses of ASL in Science and Technology include:

What does ASL mean in Education?

The acronym ASL stands for the following in Education:

Other uses of ASL

In conclusion, it can be seen that asl commonly means “age, sex, location”. Other meanings have been outlined in this article.

This article is comprehensive and up-to-date. Do well to share it with others. Thank you.

How did Sandy Cheeks Die