Let’s learn correct punctuation and capitalization. I have an interesting question to ask and provide the answer to: do you capitalize the word after a semicolon (;)? 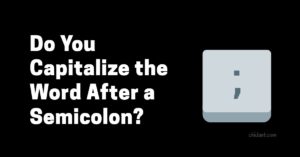 In explaining the answer to the question, I will show you what a semicolon is, the correct way to use it in a sentence and generally in writing and when to use it. We will also learn about using the colon (:).

What is a semicolon?

The semicolon is a perplexing grammatical oddity that many writers misuse or avoid altogether.

On a light note, semicolons (;) are as basic as a period stacked on top of a comma.

In simple terms, a semicolon is a punctuation mark (;) indicating a pause, typically between two main clauses, that is more pronounced than that shown by a comma.

Semicolons cannot be used in place of commas or periods. Instead, they’re somewhere in the middle: more powerful than a comma but not as divisive as a period.

Do you capitalize the word after a semicolon?

Here’s the big question. What’s the correct way to use a semicolon? 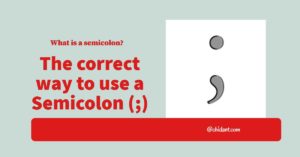 The correct way to use a semicolon

The semicolon is most commonly used to join two independent clauses without the use of a conjunction such as and.

For Example, We could go to the State e-library to do some research; Fridays are relatively quiet there.

When to use a semicolon 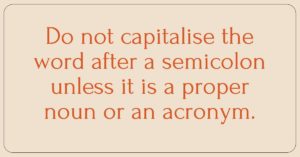 For correct use of the semicolon, it is necessary to identify the independent and dependent clauses in the sentence.

That also applies to showing contrast: just because two ideas are opposed or contradictory doesn’t mean they aren’t related closely enough to warrant a semicolon.

Example: The night is dark; the stars are shinning.

You should not capitalize the first word in a list after a semicolon unless the word is a proper noun. Take careful note of the example below:

In a multi-author citation, capitalize an author’s name after a semicolon.

How to identify independent and dependent clauses

Example: The sunset filled the sky with a deep red flame, setting the clouds ablaze.

Independent clauses, also known as restrictive clauses, contain a subject and a verb and can stand alone as a sentence; for example, “the sunset filled the sky with a deep red flame”.

Independent clauses provide the most important information in a sentence.

Dependent clauses, also known as nonrestrictive clauses, can have a subject and a verb, but they are incomplete sentences that require an independent clause to make sense, such as “setting the clouds ablaze”.

A dependent clause provides non-essential information that, if removed, would not affect the meaning of the remaining sentence.

The guidelines for correctly using semicolons are as follows: 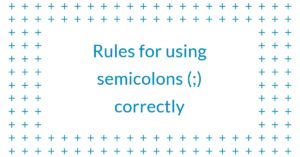 A semicolon can be used to connect two independent clauses that are closely related.

It’s worth noting that the letter after the semicolon is not capitalized.

Both of the preceding examples are made up of two complete, grammatically correct sentences that have been glued together.

A comma cannot be used in place of a semicolon. Using a comma instead of a semicolon in the preceding sentences would result in a comma splice. You don’t want that.

2. When using a semicolon between two independent clauses, remove the conjunction.

A semicolon isn’t the only thing that can connect two separate clauses—conjunctions (and, but, or, yet, so, for) can also accomplish this. However, you should not use a semicolon and a conjunction together.

That is, when you use a semicolon, you are replacing a conjunction; you do not need both.

Here’s a hint: if you used a comma and a “and” to connect two related ideas, consider using a period (the top part of the semicolon) instead of “and.”

If the items in a list are long or contain internal punctuation, semicolons can be used to separate them. The semicolon aids readers in keeping track of the divisions between the items in these cases.

4. When using conjunctive adverbs, use semicolons.

A semicolon should be used when a conjunctive adverb connects two independent clauses.

Furthermore, nevertheless, however, otherwise, therefore, then, finally, likewise, and consequently are some common conjunctive adverbs.

Do you capitalize the word after a colon (:)?

The following rules apply to capitalization of the first word after a colon:

Check out Source and other reference materials here.

To summarize, let me ask you: do you capitalize the word after a semicolon?

The answer to whether or not to capitalize the first word after a semicolon or colon is most likely “it depends.”

Follow the rules outlined in this article for the proper grammatical use of semicolons and colons.